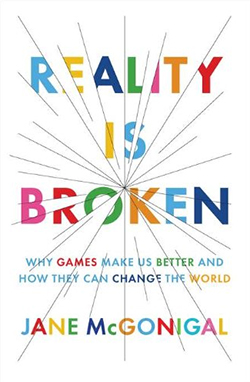 I recently picked up Reality is Broken: Why Games Make Us Better and How They Can Change the World by gaming guru Jane McGonigal and never before have I read a book that has challenged how I view the world.

The primary struggle is found in the cognitive dissonance between the gaming statistics McGonigal presents and the (mis)conceptions I have developed over the years regarding gaming and gamers:

I developed the stereotype that gamers are lazy based on my own life. In 1997, I moved to Seattle and began studying at the University of Washington. I had aspirations to study Computer Science because I loved computers, games, and the web. However, being away from home for the first time and experiencing an academic environment that I was not prepared for, I lost interest in school and instead chose to play games. My studies suffered, I went from being a promising student and escaped into the world of Starcraft, Command and Conquer, and Diablo.

This gaming escapism was born out of a desire to avoid the harsh reality that I needed to work harder than I was ready to. But just because I was lazy doesn’t mean that all gamers are lazy.

The statistics are sobering: “WoW [World of Warcraft] developer Activision Blizzard currently reaps an estimated $5 million every single day in global subscription fees alone” (McGonigal, 2011, p. 53). Since World of Warcraft launched, the players have spent “a grand total of just over 50 billion collective hours–or 5.93 million years” (p. 52). 5.93 million years is apparently the stated number of years that humans have been evolving, so in seven years, human beings have collectively played a game for the entire amount of time humans have been evolving.

I’m not entirely sure how to process the enormity of those figures. The “gamers are lazy” side of me shakes my head and says, “What if they devoted that time to fixing reality?” The optimistic wonderer in me says, “If they can do that, then surely something amazing could be accomplished…”

I’m still in part one of Reality is Broken and I am curious how McGonigal will illustrate how games can “fix” our broken reality.

Is gaming the solution?

Are there clues as to how we can reframe reality?

The answer is yes.

But we must first put to death our misconceptions of what reality is and what gaming is not.

View all of Chris's posts.

The Work I Do