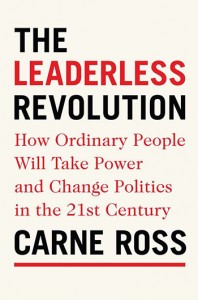 I first came across Carne Ross and his book The Leaderless Revolution: How Ordinary People Will Take Power and Change Politics in the 21st Century on Moyers & Company a few months ago. Ross, an economist and former British diplomat, candidly addresses the failure of the current political system and his growing disillusionment through first-hand experience.

“…in short I realized, dimly and slowly, a profound and intrinsic deficit of governments: that they are required to take what is complex–reality–and turn it into simplistic pronouncements and policy, the better to convince the population that government has matters in hand. People in government are not bad or stupid, on the contrary; but the contract between people and government forces them to claim something which no sensible person should claim, that government–anyone!–can understand and predict the massive complexity of the contemporary world, and manage it on our behalf. Every politician must claim to the voters that they can interpret the world, and produce certain effects, just as the officials working for them must pretend that they can too. I know this because I did it.”  (Ross, 2011, p. 20)

The Leaderless Revolution is a powerful book to read in the midst of political season. As local and national politicians begin campaigning, proclaiming, and attacking, Ross’ words have a stinging effect to take people beyond the rhetoric and mobilize them into action: “It is above all a manifesto about how to act–method–not a prescription of what end-state or utopian system to seek” (Ross, 2011, p. 24).

I have struggled with the concept of leaderless leadership. I think that people need leadership, but what is often viewed as leadership is at least egoism and at worst despotism. What Ross is advocating for is a collective leadership where every person is a leader, not passing on their individual responsibilities and civic duties to elected officials and lobbyists.

I look forward to going deeper into the book and encourage everyone to at least watch his interview on Moyers & Company (Ross appears after Paul Volcker, an enlightening interview as well).