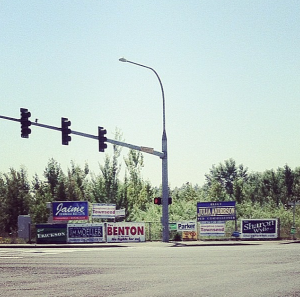 It’s that time of the year where every available space on the roads of Clark County is littered with political signage containing poorly conceived slogans, horrible logos, awful color schemes, and the mind-numbing consistency of waterboarding.

Yes, political signage is a reality. But it is just another sign that politics have stumbled upon the status quo of marketing a political campaign. Everyone does exactly the same thing as their opponents, hoping to get votes because a potential voter saw a sign while eating a Krispy Kreme donut at Padden Parkway and Andresen Road.

One observation is that the signs from career politicians have the look that they were brought out of the storage unit just this morning as if to say, “Yep, gotta put up the signs Margaret so people know who to vote for.”

Another observation: the signs that are too slick turn me off just as much as the signs that look like crap. The higher the gloss, the more it makes me think about how much money is in the race to become the next (fill-in-the-blank of your favorite political office).

Solution: The Return of the Public Forum

It’s time for every citizen to be a part of the political process. It’s time for the poor to meet the rich. It’s time to address inequality not just in economic terms, but in terms of sexuality, religion, and politics. It’s time to create neutral space where this can happen, free of outside influence, agendas and advertising.

It’s time that political signage be regulated in order to avoid the feeling that our visual senses are being assaulted. Limit four signs to a corner. In the photo above, I count 11 and that is only one corner of four. There are probably 40 signs at that intersection.

Fine a candidate for having more than one sign in a two-mile stretch of road. Reduce acceptable sizes by half. Sure, readability goes down, but so does the noise and forces candidates to think about what goes on a sign.

Political signs will never go away. The reliance upon them will only increase as time goes by because that is what you do when you run for the (fill-in-the-blank of your favorite political office). As citizens we do have a right to call for regulation and take back our visual senses.

However, much like the entire political process in general, change will only happen when we the people stand up and speak.