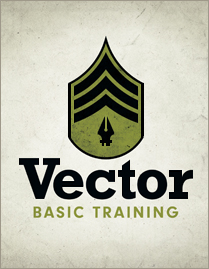 Vector art is awesome. There is something about crisp lines, mathematical perfection, and infinite refinement that I find exciting, but I’m not as good working in Adobe Illustrator as I would like to be. Enter Von Glitschka’s book and workshop: Vector Basic Training.

I’ve followed Von (aka Vonster) for a few years, but my appreciation for his work has grown since seeing the framework of vectors and his systematic approach to creative work presented throughout his book.

In Chapter 2, Your Creative Armament, Vonster commands the reader: “When you begin a new project, you should be able to start building immediately. Your creative process shouldn’t waste a bunch of time setting preferences, importing your styles and color swatches, creating new layer structures, and so on at the start of each and every project.”

Creativity is a System

Whether you are an illustrator, filmmaker, photographer, musician, writer, designer or developer, you most likely have a system for your creative process. However, the majority of artists and creatives avoid such talk because somehow defining their creative processes cheapens and bastardizes their art. Instead, they pray, drink, smoke, eat, shoot up, walk, run, dream, practice, produce, draw, write, procrastinate, avoid, plead and whine to their muse, God, god, universe, inspiration, blank sheet, empty screen, social networks and drinking buddies in order to find what they need to do great work.

But whether we like it or not, creativity is a system, it is a process. There are tools and techniques we can use to produce great work. Many of them are mentioned in the list above, but those are simply amenities built upon a foundation of creativity that need to be set in your life in order to go beyond mediocrity and the status quo.

With that, I add to the list of things you should do everyday to build your foundation of creativity:

There is no prescription to follow on how long to do each of these tasks. You’re not looking to be perfect. Rather, you are seeking to expand your capabilities and be prepared for what will be built with the knowledge contained within your creative foundation.

Going Beyond the System

While understanding and working within your systematic process is essential for critical areas necessary for completion, such as the beginning and end of a project, there are important moments that require a lack of structure and analytical thinking.

Moments that exist to find something new, unknown to our inner being.

Allowing the mind to float into outer space and capture the burning illumination of the stars and celestial bodies.

Lines drifting through the ocean of emotion, following the tides and currents of the beauty sought after.

Words melting the stone cold heart of a cynic, the light metaphor of love and logic.

Be Ready for Creativity

Ultimately, knowing how you work prepares you for building, toiling, and receiving the art that you want to bring into the world.

Avoiding the notion of systems and processes will only bring delay and despair, but an overemphasis upon the process will lead to a rigid art form lacking soul and character.