It’s amazing how life reflections pop into my mind when I’m doing mundane actions in life, such as brushing my teeth. Take last night for instance. Staring at myself in the mirror, brushing the day away (after flossing) and it hits me: This is why I didn’t receive the Marshall Award.

Let me rewind and catch you up to speed. Last summer, while filming the Innovators of Vancouver episode with photographer Dave Scott, I received a phone call letting me know that I had been nominated for the 2010 General George C. Marshall Public Leadership Award. I knew nothing of this award and quickly learned from the City of Vancouver’s website that:

“The General George C. Marshall Public Leadership Award is presented annually to encourage and recognize the leadership potential of the next ‘greatest generation.’ Selection for this award is based on demonstrated leadership abilities, commitment to public service, academic achievement, and potential for ongoing leadership roles in public service.”

I felt so humbled that someone thought of me as having leadership potential. The more that I learned about Marshall, the more small and insignificant I felt. The legacy of General George C. Marshall is an amazing study of honor and duty. He lived in Vancouver for a two-year period prior to World War II, was an excellent military strategist throughout both World Wars, and was involved with establishing the rebuilding of Europe after World War II known as The Marshall Plan, for which he would win the Nobel Peace Prize in 1953.

Marshall was a brilliant leader because he believed in providing visionary leadership, as well as using that leadership to help people take initiative, grow, and learn from their mistakes. He was not a people-pleaser, politician, sycophant, or complainer. He had duty, honor, and acted accordingly with regards to the military, America, and his family.

An amazing man, who I wish was alive in the world today, giving us all a glimpse into visionary leadership and why it matters.

Going through the process was interesting. I had to think about what leadership meant to me, what characteristics of Marshall I related to, and what I hoped to accomplish with my life. I bought my first suit, met the mayor of Vancouver along with other high-ranking people throughout the Vancouver community, and gave an off-the-cuff speech. Interesting for an extreme introvert. 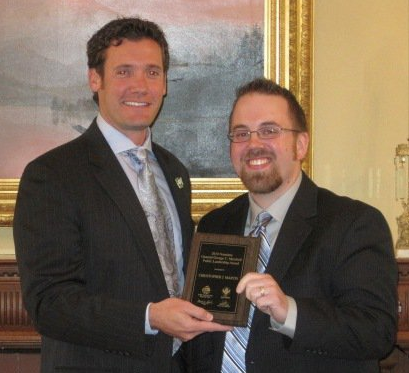 Needless to say, after the interview process and the social event, I didn’t receive the award. I was saddened to a certain degree, because like everyone, I want to win. However, the majority of me was comforted to know that I was not the recipient of the award, but I didn’t know why.

Then almost a year later it hits me: I didn’t receive the Marshall Award, because I was at the very beginning of a year-long pursuit of learning about the person that I was deep-down inside and finally becoming. My identity was trapped between who I ought to be, in order to satisfy others, instead of being who I am. I was only at the start of a long journey and to be awarded a life-changing opportunity that early would have been detrimental to the success that I would eventually achieve.

I have come out the long side of a metamorphosis process. I have shed my cocoon and owned my identity as the person that I was deep-down inside, and interestingly enough, have always wanted to be. Does this negate the nomination and recommendation of my colleagues? Not at all, if anything, it shows that they saw what I was unable to see. It also highlights the wisdom of the selection committee that saw in me an incomplete picture of leadership, emphasizing how much respect and care goes into picking the Marshall Award recipient.

As I reflect upon the past year, I am proud of the man that I have become. I have learned to maintain a healthy weight, being able to enjoy exercise and not controlling my emotions with food. With that, I have learned to control my emotions, thanks to the counseling process that I took very seriously for a couple of years. I started writing daily so that I could find my voice with regards to creativity, business, philosophy, culture and life. I even began publicly speaking, traveling to Florida in February to speak at Lotusphere 2011 with Bruce Elgort, with whom I spoke at the 140 Conference in Vancouver, WA. I became a necessary extrovert.

I am amazed that as I share my life and thoughts with others, I not only impact and inspire them, but they in turn inspire and change my life. I am grateful for the friendship I have formed with the person that nominated me for the Marshall Award, because I see in them the very essence of what visionary leadership is all about.

I even have a glimpse of a plan for my life in the coming years. My life is working towards something–great or small, that doesn’t matter–what matters is that I have opportunities to be a part of something bigger than myself. I am considering a Master’s program in Media Psychology and Social Change. I am looking to continue speaking and writing, hopefully inspiring people to think differently about how their lives matter in the grand scheme of things. Most importantly, I am constantly working on being the man that I need to be for my wife, family, and friends.

Am I a visionary leader? I can’t answer that. What I can say is that I am enjoying life and doing my very best to try and make this world a better place. I am daily striving to make a difference, no matter how small and insignificant it may be, because that is all I can do.

2 replies on “Reflections on a Nomination”

Awesome post Chris.  It is our daily actions that keep us humble and happy while we take our small steps and large steps to become better people and better leaders.

Thanks VaNessa. Also, it was nice to meet you briefly and interview you on camera at the 140conference.  🙂