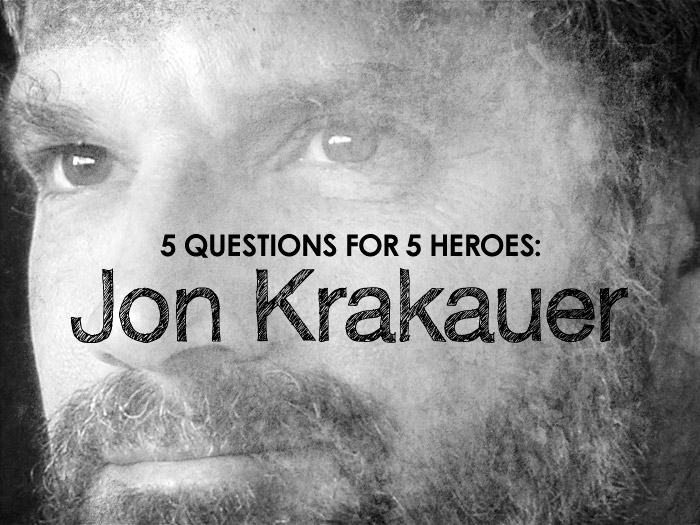 Writer, climber and outdoor-enthusiast Jon Krakauer has written some of the most important literary works of the past two decades. From Into The Wild, an investigation of the life and death of Christopher McCandless in the Alaskan wild, to Into Thin Air, a living document of the tragic 1996 Mt. Everest season which claimed 15 lives, Krakauer’s books are a mix of journalistic integrity, self-reflection and social commentary. His writing style has received both high praise and criticism from a broad range of people, including outdoor-enthusiasts, climbers, and even the leadership of the Mormon Church, primarily because of Under the Banner of Heaven, an intriguing look at the historical differences between the modern Mormon Church and the fundamentalist group devoted to the practice of polygamy.

At age 57, Krakauer continues to tirelessly write and defend his work. He his outspoken, a vocal critic of other literary works and authors, and above all else demands accuracy, honesty and integrity.

For a glimpse into the psyche of Jon Krakauer, I recommend that you pick up one of his books or watch the Sundance Channel’s episode of Iconoclasts where he and Sean Penn, director of the film adaptation of Into The Wild, interview each other about life, fame and their respective crafts. They even travel to the very place in Alaska where Christopher McCandless died, where they camped and poured a ceremonial white russian, McCandless’ favorite drink, into the ground.

Now that you have a brief biography of Jon Krakauer, here are my five questions for him.

1.) The majority of your books, as well as the journeys throughout your active life, have brought you face to face with death. The death of idealism in McCandless, the accidental death of Pat Tillman in war, and the perishing of your fellow climbers on Mt. Everest.

How have you been able to emotionally handle and process the fact that you have literally looked into the eyes of death? Are you haunted by the ghosts of the people you have written about?

2.) From Into The Wild and Into Thin Air, to Under the Banner of Heaven, you have received an enormous amount of criticism for your writing-style and the way that you have portrayed real people.

How has this criticism fueled your desire to be above reproach in your research and writing, as well as maintaining the need for journalistic integrity and honesty?

3.) Now that you have distance from the disaster in 1996 on Mt. Everest, has the tragedy of the deaths of friends and climbing companions eclipsed the accomplishment of actually summiting Everest? Do you playback the moment when you stood breathlessly at the top of the world?

4.) You mentioned in Iconoclasts that you dislike the writing process and yet, you continue to write books.

Why? What is so alluring about the journey of writing a new book in spite of the disdain for the process?

5.) What legacy do you hope to leave the world with your books after you have died?

As you ponder these questions, may they lead you to discover the writings of Jon Krakauer. Enjoy!

One reply on “5 Questions For 5 Heroes, Part 3: Jon Krakauer”

some very thoughtful questions. I still cant figure this guy out. Sometimes he appears very compassionate and other times not at all…