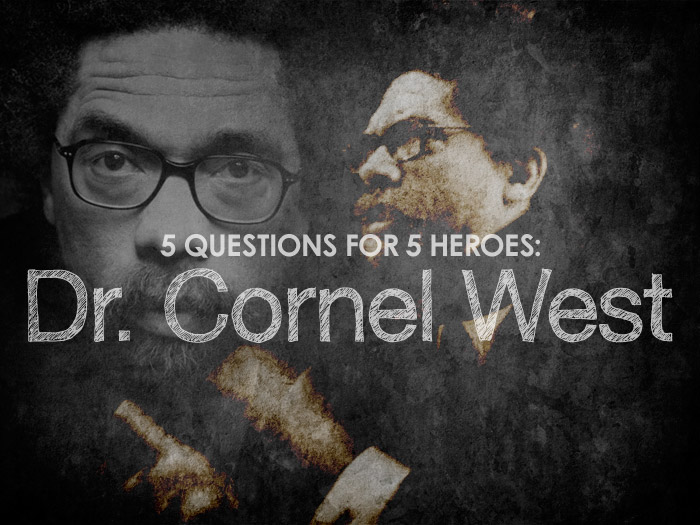 My first exposure to philosopher, author, speaker and civil rights activist, Dr. Cornel West, was on The Colbert Report with Stephen Colbert, in which West talked in detail about hope. Hope not only for America, but a hope that is accessible and available to all of humanity regardless of race, gender, religion or sexuality. Listening to the words he used, how he used them in specific contexts, and the pictures he verbally painted left me in a state of intoxication. I was hooked. I wanted more.

Shortly thereafter, I discovered and bought his memoir, “Brother West: Living and Loving Out Loud,” during a time in my life when I needed guidance and sage wisdom from those that have lived and experienced life. His words had power and meaning, gripping my soul from beginning to end. West writes:

“The Blues are how humans, blessed to be conversant with the deepest parts of their soul, tell their story. It’s a comedy, it’s a tragedy, it’s a farce, it’s a sitcom; it’s an epic, it’s a sonnet, it’s the straight-ahead twelve-bar blues.”

From Jimi Hendrix and Stevie Ray Vaughan to Robert Johnson and Eric Clapton, the blues have always moved me and I love how West defines them as the soul’s medium for telling its story. Poetry and truth.

But West’s ability to verbally paint pictures in your mind shouldn’t be diminished as he expands into areas of intellectual and philosophical thought. For example, West writes in “Brother West” on the subject of democracy, love and justice: “My conclusion became my calling: That justice is what love looks like in public, just as deep democracy is what justice looks like in practice.”

To get a further glimpse at the depth and complexity of character residing within Dr. West, I encourage you to dig into the many books that he has written. Two important works that talk about the state of America, from its people to the democracy they live by, are “Race Matters” and “Democracy Matters.” They are not light-reading choices by any stretch of the imagination, but an opportunity to be enlightened with thoughts and ideas about topics that we don’t think enough about on a daily basis.

Finally, for those that don’t really like to read, listen to Dr. West’s audio commentary, along with fellow philosopher Ken Wilber, on each film in The Matrix Trilogy. They discuss the philosophy, existentialism and religious symbolism throughout the movies, as well as provide interesting insights on the meaning that the Wachowski Brothers have infused in each celluloid frame of their creation.

With that somewhat brief introduction to Dr. Cornel West out of the way, here are the five questions that I would love to ask him.

1.) In your memoir, “Brother West,” you describe yourself as “a bluesman in the life of the mind, and a jazzman in the world of ideas.” You also describe in detail a very nomadic lifestyle in which you travel the world in order to connect with family and colleagues, tirelessly preaching the gospel of hope.

Is there ever a moment when you wish you lived a more stable, less frenetic lifestyle? How has the acceptance and embracement of a chaotic life impacted the words that you have for others?

2.) Your words are intellectually deep and complex, prompting me to read your writings with dictionary in hand, not that that’s a bad thing. In contrast, your speech seems to be less scholarly and more emotional, often speaking in terms of hope and love, brother and sisterhood, understanding and the seeking to be understood.

What power does our individual and collective language hold in the transformation of our society at large and the smaller communities that make we belong to?

3.) How does your calling as a traveling bluesman preaching hope, love, understanding and reconciliation affect and change your view of whether your life is seen as a success or a failure?

4.) Your work throughout your life as a civil rights activist has been prompted and fed by the Gospel of Jesus Christ, the Black Panther Party, and the words of other activists such as Malcolm X and Martin Luther King Jr.

How has your view of civil rights changed over the years? Is race as much of an issue today as it was in the sixties? How has an overabundance of knowledge and information led to a diminishing of dialogue and debate regarding critical social issues, such as race relations in not only urban, but suburban communities?

5.) What impact can one person have on the world? In an age of corporate power, where faceless entities control wealth and information, do we the people still have the leverage and will to affect cultural, financial, social and revolutionary change?

These are my five questions for Dr. Cornel West. I hope that they will lead you, as they have for me, down the trail of deeper commitment and understanding of the world that we share with one another.

Later this week, I continue my “5 Questions For 5 Heroes” series with author and climber, Jon Krakauer; photographer and writer, Galen Rowell; and finishing with five questions for Metallica singer and rhythm guitarist, James Hetfield.

[…] somewhere. It has really given me pause to think about why these five people — Terry Gilliam, Cornel West, Jon Krakauer, Galen Rowell and James Hetfield — are my […]