One of the things I like most about Twitter is that I get great ideas for series of blog posts. Thank you to Cheryl Bledsoe for talking about her latest heroes Robert Kennedy and Martin Luther King Jr. the other evening because it inspired me to think about my heroes and the questions I would want to ask them. So, with that, here is part one of my new series: “5 Questions For 5 Heroes: Terry Gilliam.” 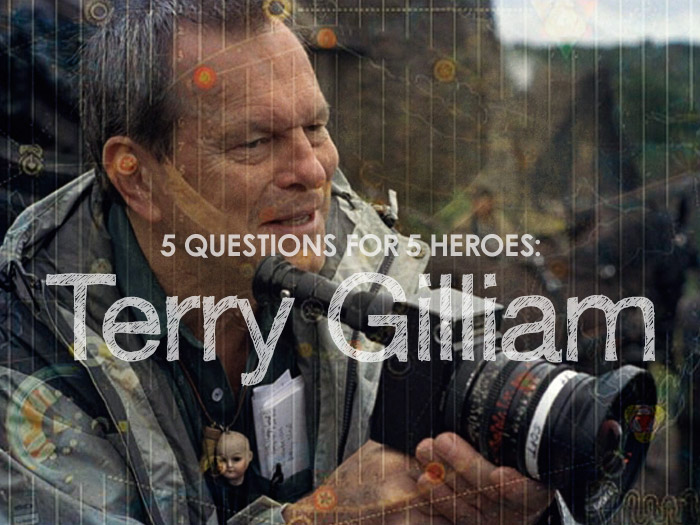 Terry Gilliam is an imaginative and risky filmmaker, groundbreaking animator and all-around mad man, best known for his collaborative effort with Terry Jones, Eric Idle, Graham Chapman, Michael Palin and John Cleese, simply called Monty Python. He would go on to direct my favorite films of childhood and adulthood: Time Bandits, Brazil, The Adventures of Baron Munchausen, The Fisher King, 12 Monkeys, Fear and Loathing in Las Vegas, The Imaginarium of Doctor Parnassus, and a few others that you may or may not heard of.

To learn more about the insane and tempting lure that is Terry Gilliam, it would be best to not only watch the films listed above, along with Monty Python’s Flying Circus, but also to view the documentary Lost in La Mancha, highlighting the failed attempt at making a film epic about Don Quixote. You will see the passion, joy and pure love for filmmaking that grips his very soul. You will experience the “Terry Gilliam Giggle” which as he said in a film retrospective on his career, “My epitaph will read, ‘Here lies Terry Gilliam, he giggled in awe.'” And you might just become the next Terry Gilliam fan.

With that, here are my 5 questions for Terry Gilliam.

1.) If you compare your career to that of other filmmakers from your era, your body of work is a lot smaller in terms of numbers, but larger in vision, imagination and risk-taking. Do you ever have moments when you wish you would have sold out your vision in order to make more commercially-viable, accessible films?

2.) Of the films that you have made, which is your favorite in terms of risk-tasking and vision? Which film do you wish you never made? How does this view of your favorite and least favorite films redefine risk and imagination?

3.) Your entire career has been a battle, an enormous struggle against the machine that is Hollywood. Why do you keep making films when each one is a war against time, money, vision, completion and acceptance?

4.) If you could collaborate with any modern filmmaker, or even an up and coming filmmaker, who would it be and why?

5.) What has greater emphasis in filmmaking and storytelling: using technology for the sake of being modern or defining and using specific tools of the trade based on the needs of the story itself?

I could think of a lot more questions, but these are the ones that I would want to know answers to the most. What questions would you ask Terry Gilliam?

View all of Chris's posts.

The Work I Do